Before we even get into the rules governing Poker, it needs to be understood that Poker the origins of Poker dates all the way back to the 16th century. Therefore, it is understandable that there are several variations and versions of Poker which are now in existence. However, one of the most popular types of Poker around the world is Texas Hold ‘em and it is usually the kind of Poker which is played in most of the biggest Poker tournaments in the world including the likes of WSOP, WPT, EPT, etc.

Even though, it seems simplistic at first when compared to some of the other types of Poker, you can rest assured that it does get pretty complicated in certain scenarios, especially when playing a high stakes game. This is why there is pretty popular proverb when it comes to Texas Hold ‘Em and it goes a little something like this –“It takes a moment to learn, but a lifetime to master”.

The Basics Of The Texas Hold Em

In the paragraphs below, we will enumerate the basic rules of Texas Hold Em’, which should be a good place to start if you want to get familiar with the rules and the hands.

Quick overview of the basic rules of Texas Hold’em, covering betting and game-play. Texas Hold’em betting rounds After you have your first two hole cards, you have the first round of betting. The first person to the very left of the player who posted the big blind will go first on this pre-flop betting round.

How To Play Texas Holdem Rules

Usually, while playing in a land based casino or a real money online casino, there is no need for a button as there is a professional dealer hosting the game at the table. It is when you are playing with friends, that you will need to use the button. After every round, the button moves one spot to the left and that player then becomes the dealer for that round.

Not only does the button determine who the dealer is, but it will also dictate who begins the betting with the small blind and the big blind.

Rule 2: The small and big blind

At the start of every round, a couple of players at the table will mandatorily have to make bets. These bets are known as the small blind and the big blind. This is what kicks off the betting and ensures that people need to post a minimum bet if they want to stay in the running and stand a chance of winning the pot. As the number of players on the table gets smaller, and the existing poker chip collections of the remaining players grow larger, the bling will also be increased periodically.

Rule 3: The objective of the game

Obviously, the objective of the game is to win. However, you only win when you have the best combination of cards when it comes time to showdown. In Texas Hold’em, every player receives two cards face down and they don’t have to reveal their cards to anyone until it comes time to show (showdown). Apart from the two cards in hand, each player can also use the common pool of five cards which will be dealt face up on the table. These cards are common to all players at the table and so they are called community cards. When you make the best combination at the table using the cards in hand and your community cards, you will win the pot that was accumulated during the betting rounds for that play.

A call is when you match the minimum amount to stay in the game. A raise is when you increase the bet and keep it within the specified limits and a fold is when you don’t want to bet anything at all so you retire from the game and give away your cards.
The next players to follow will also have the same options. However, if the player before them had raised the bet, then they will have to match the raised bet to stay in the running.

Betting – Second round, third round and final round

In the second round, the dealer will reveal the first three community cards. Then the player to the left of the button (active player) will begin the betting. Now, the player has the additional option of “check”, which means to pass the betting opportunity to the next player without making a bet.

What Are The Texas Holdem Rules

Next, the fifth community card is revealed and the fourth and final round of begin may start. As usual, the first active player (someone who has not yet folded) will get to go first. Even in this round, players have the option to fold, call, raise and check. Once the final round of betting is concluded, it is time to see who is the winner.

Now that all the community cards have been dealt and all the betting is complete, it is time to determine who won the pot that has accumulated. This part of the game is known as the showdown. The players who are still in the game (haven’t folded) will be required to expose their two “hole cards” (the two cards in their hand non – community cards).

Depending on the rankings of the cards and hands, the winning hand is determined. The player who has made the best combination of cards will get to take the pot.

Texas Hold’em is the world’s most popular form of poker, thanks in large part to the World Series of Poker and other televised poker tournaments that have brought the game to the masses. Texas Hold’em is both easy to play, making it ideal for those just learning about poker, and filled with incredible depth and strategy, making it a game that challenges even professional players. If you need a refresher on the Texas Hold’em Rules, this article should help you get started in this great poker game. 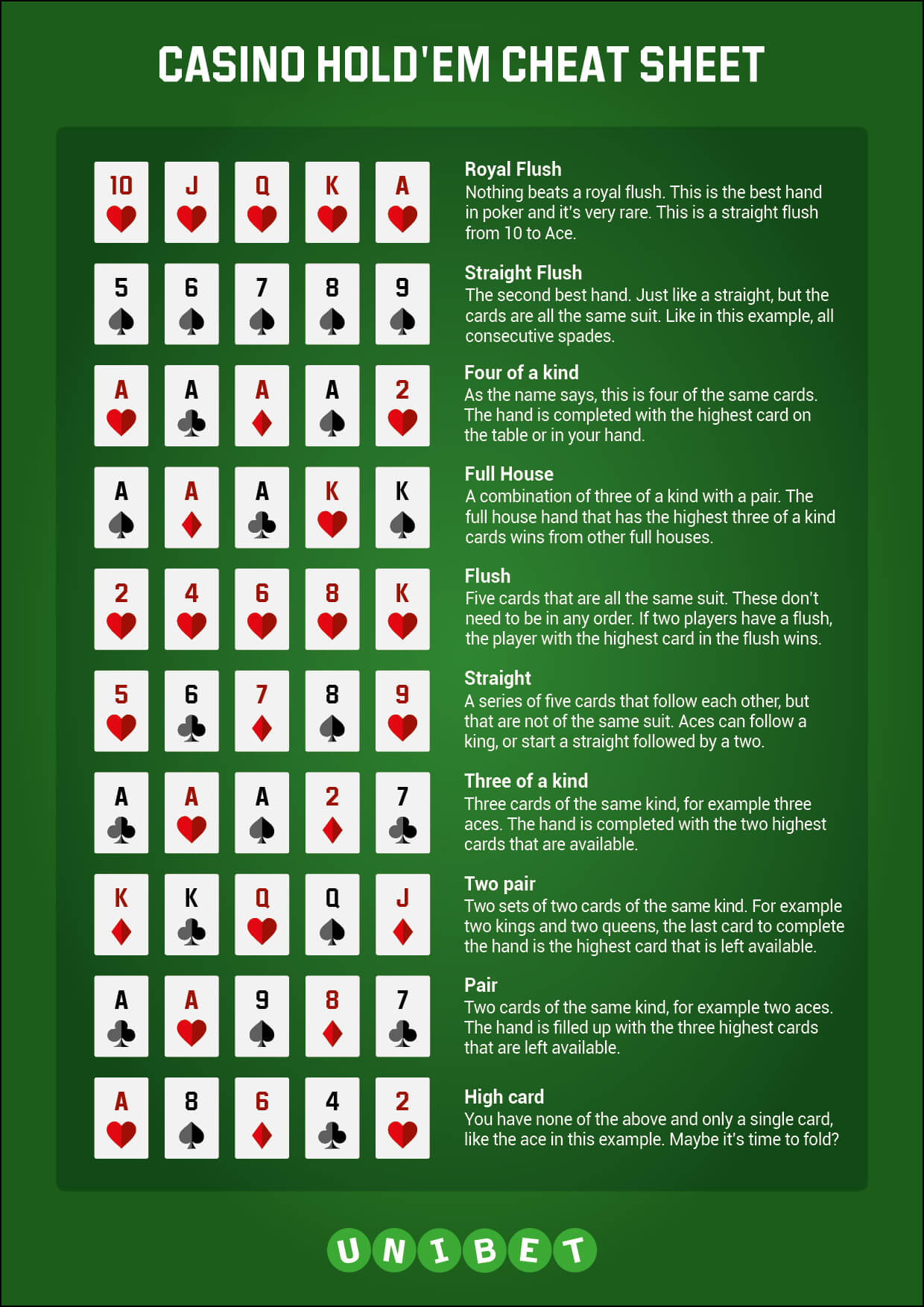 Texas Hold’em is played with a standard deck of 52 cards. The object of the game is to make the best possible five-card poker hand using any combination of the two card’s in a player’s hand (known as the “hole cards”) and the five community cards that the dealer places in the middle of the table, which can be used by all players. The standard hand rankings are used, as follows (from best to worst):

Typically, a game of Texas Hold’em will be played with anywhere from two to ten players at a table. Games with more players are possible, since each player only needs two cards for themselves, but games with more than 11 players at a single table are rare.

Once all blinds have been posted and antes have been paid, the dealer will deal two cards to each player. Each player may examine their own cards. Rampage poker. The play begins with the player to the left of the big blind. That player may choose to fold, in which case they forfeit their cards and are done with play for that hand. The player may also choose to call the bet, placing an amount of money into the pot equal to the size of the big blind. Finally, the player can also choose to raise, increasing the size of the bet required for other players to stay in the hand.

Moving around the table clockwise, each player may then choose to take any of those options: folding, calling the current bet, or raising the bet. A round of betting ends when all players but one have folded (in which case the one remaining player wins the pot), or when all remaining players have called the current bet. On the first round of betting, if no players raise, the big blind will also have the option to check, essentially passing his turn; this is because the big blind has already placed the current bet amount into the pot, but hasn’t yet had a chance to act.

Assuming there are two or more players remaining in the hand after the first round of betting, the dealer will then deal out three community cards in the middle of the table. These cards are known as the flop. Play now begins, starting with the first player to the left of the dealer button (if every player is still in the hand, this will be the small blind). Players have the same options as before; in addition, if no bet has yet been made in the betting round, players have the option to check. A round of betting can also end if all players check and no bets are made, along with the other ways discussed above.

After this final round of betting, all remaining players must reveal their hands. The player with the best hand according to the hand rankings above will win the pot. If two or more players share the exact same hand, the pot is split evenly between them. After each hand, the button moves one seat to the left, as do the responsibilities of posting the small and big blinds.