For beginner poker players, memorizing the poker hand rankings can seem overwhelming. There are a lot of moving parts in a poker hand and trying to remember if a straight beats a flush can be confusing.

There are some poker hand ranking situations that will arise where you might need a little help - we've identified and explained a few of those below the hand ranking chart below.

Trust us - you'll get it! And soon you'll be the expert explaining to your friend at your home game why his two pair is the losing hand. Bookmark this page to keep our poker hand ranking chart as an easy reference guide - and check back for a downloadable Poker Hand Ranking PDF to come soon!

Which is higher a flush or a straight?

Always the flush is higher! This is one of the bigger misconceptions of poker hand rankings.

Despite it seeming to some that a straight is more difficult to get, a flush – meaning five cards of the same suit – is actually less likely of a hand to put together. Therefore the Flush is ranked higher than the Straight.

This applies in every situation – even if the Straight has more high cards (or the highest card) between the two hands. A Straight Flush, which is a straight with all of the cards of the same suit (eg. 4h-5h-6-h-7h-8h), is higher than both of those hands.

Which is higher, three-of-a-kind or two pair?

This is another common poker hand ranking confusion. A “set” or “trips” or 3 of a kind ALWAYS beats two pair.

Again it doesn’t matter if it’s a set of 2s and the two pair are Aces and Kings – the set always wins.

How do you know which two pair hand is higher?

The ranking of your two-pair hand is NEVER the sum of your two pairs. So, for example, two pair of Aces and 2s is ALWAYS higher than two pairs of Kings and Queens. The face cards look more powerful, sure, but it is only the HIGHEST single pair of the two pair that determines the winner. 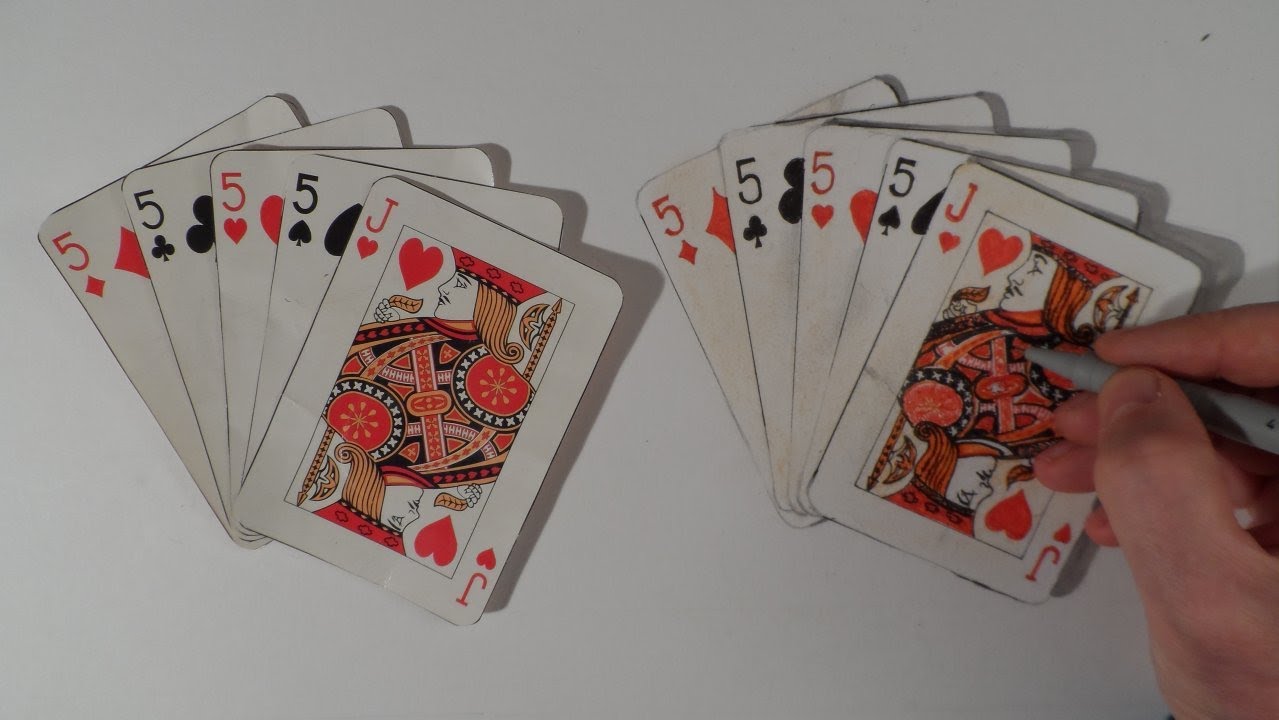 How do you know which Flush is higher?

If two players both have a Flush the hand with the highest card is the winning Flush. This means any Flush with an Ace is it will win over any other Flush. Much like two pair the combined total of the Flush is not relevant – only the single highest card determines the winning hand.

What is a kicker in poker?

A kicker is an unmatched card that's not part of a made hand that determines who wins when two players have the same ranked hand.

For example if both player have a single pair of aces, the next highest card in each of their hands are matched against each other to see which is highest. Eg.

Player 1 is the winner as the Queen 'kicker' is higher than the 9 kicker. If the first kicker cards are the same, eg AAQ and AAQ, the next kicker card is then used to determine the winner.

What does it mean to 'play the board?'

Playing the board means the 5 shared community cards in the middle of the table are the five cards that make up a player's best possible five card hand. For example if the board cards are:

A-K-Q-J-T of different suits and a player's hole cards are the 6-7 of hearts, that player's best possible 5-card hand is the Broadway straight and his or her hole cards are inconsequential to the hand.

If all players left in the hand are 'playing the board,' the pot is split evenly among them. A player must make it all the way to the showdown to play the board.

What Beats What In Poker Printable

Do Aces count as high or low?

In a standard 'high' poker game like Texas Hold'em aces can be played as either high or low. An ace can be used, for example, to complete the bottom end of the straight A-2-3-4-5. This is called a 'wheel' is is the lowest possible straight.

It can also of course be used as a high card as as the high end of a straight eg A-K-Q-J-T. It cannot, however, be 'wrapped around.' So Q-K-A-2-3 is NOT a straight.

In Lowball games Aces can be either high or low; it depends on the game variation. For specific poker hand rankings for lowball games, check our rules pages below.

Three pair is not a hand. Your best poker hand is made up of 5 cards and 5 cards only. You can never have three pair.

Which poker suit is the highest?

In standard 'high hand' poker games like Texas Hold'em and Omaha, suits are not ranked compared to each other. Meaning no one suit is ranked higher and suits are not used to determine the winning hand. Only the card rankings matter

In other card games, however, suits can be ranked and come into play when determining betting order or winning hands. Typically suits are ranked in reverse alphabetical order from lowest to highest.

The only place where suit can come into play in poker is in 7-Card Stud, when the player with the lowest card showing has to pay the 'bring in' bet in the first betting round. If two players have the same ranked card, suits can be used to break the tie.

Are all red cards or all black cards a good hand?

Unless the suits are the same, five cards all of the same color are not a poker hand. A Flush by definition will have all red or black cards but all the cards must be diamonds or hearts or clubs or spades for it to be a Flush.