In contrast to poker, where players compete with each other, blackjack is a one-on-one game between each player and the dealer. As the dealer, the basic rules of blackjack still apply. Cards 2 through 10 are worth their face value. The jack, queen and king are worth 10 points each. Playing against a live dealer as opposed to a computer program affords a blackjack player many opportunities. Human dealers make mistakes that sharp players can always use to their own benefit. Various forms of advantage play can be used, such as shuffle tracking and hole carding.

Some hard totals in blackjack are more difficult to handle since they are neither high enough to stand on nor low enough to hit without a significant risk of breaking the hand. This gets many recreational players perplexed causing them to make intuitive decisions while at the table and we all know what hunches translate into in the context of gambling – excruciating losses in the long term.

Two of the hands many unwitting players tend to struggle with are hard totals 12 and 13. Some people are bold enough to always hit those hands in an attempt to outdraw their dealer. Others are terrified of the idea of busting on a hit so they always decide to stand.

What both types of players choose to ignore is that mathematically, there is a right and a wrong way to play hard 12 and hard 13. It all comes down to what dealer upcard you are facing. In this article, we explain the right ways to play these totals and tackle some commonly committed mistakes.

The Optimal Playing Decisions for Hard 12

A pair of Aces also results in a 12 but we are not discussing this here because this is a soft total that calls for an entirely different approach. The correct playing decisions for a hard 12 are based solely on the upcards of the dealer.

The number of decks and the playing conditions for the dealer do not affect your decisions in this case since the optimal strategy for hard 12 is the same no matter whether you are playing single-deck, double-deck, multiple-deck, H17, or S17 blackjack.

Basic strategy advises players to stand on hard 12 against dealers who expose a 4, a 5, or a 6. If you take the time to examine the chart in our article on blackjack odds and probabilities, you will immediately notice that these three cards are very disadvantageous for the dealer because they carry over 40% risk of the dealer busting.

The Optimal Playing Decisions for Hard 12 Additional TipsIf the dealer exposes cards 2, 3, 7, 8, 9, 10, or Ace, players are recommended to hit their hard 12. The dealer may still be in a breaking position with the deuce and the trey but these two cards are not as bad for him or her.

The likelihood of the dealer busting with them is respectively, 35.30% and 37.56% so you stand better chances of winning if you hit instead of standing on your hard 12. Hitting the hard 12 against a 2 or a 3 is recommended because there are only 4 out of 13 possible card denominations that can lead to a bust – the 10 and the three court cards (Jack, Queen, and King).

Then again, 3 out of 13 card denominations result in a significant improvement of the player’s hand, the 9, the 8, and 7. If you draw cards 2 through 6, you may not end up with a stellar total but at least you can rest certain they will not bust you either.

Note that when the dealer shows upcards 7 through Ace, they are in a standing position which is to say there are more likely to turn over a hole card that gives them their standing total of 17 or higher. Because of this, you are recommended to take a hit on your hard 12. Otherwise, the dealer will outdraw you most of the time with upcards 7 through Ace.

Doubling down is never an option with a hard holding of 12 but you may choose to split paired 6s. We cover this subject in more detail in a separate article. For now, it suffices to say that here your splitting decisions are affected by the number of decks in play as well as by your dealer’s upcard and their fixed standing total.

Misplaying Hard 12 against the Dealer’s Deuce

One of the most striking things about this hard total is that it appears on the list of the most frequently misplayed hands in blackjack despite the fact the basic strategy decisions for hard 12 are among the simplest to learn because they are pretty much the same regardless of deck number and dealer standing rules.

Many unknowledgeable players tend to misplay their hard 12 particularly when they are up against a dealer exposing a deuce. As we explained, the correct play for hard 12 against a 2 is to hit. Yet, many people choose the opposite move – they stand instead of hitting because they are scared of busting with a ten-value card.

All qualms of the house outdrawing them disappear because the deuce is a bad card that exposes the dealer to the risk of busting, right? But then again, there is also the “10 in the hole” rule some players always abide by, reasoning that the dealer’s hole card should always be considered a ten-value one. The dealer would flip a 10 next to their deuce, take another hit, and bust.

And, yes, the deuce is surely not the most advantageous card for the dealer but it does not put them in the worse possible position, either, like a 5 or a 6 does. Their bust frequency with the deuce is lower as we told you earlier, which skews the probabilities of winning the hard 12 with a hit in your favor, albeit slightly.

Misplaying Hard 12 against the Dealer’s Deuce Additional TipsAs was previously explained, there are only 4 out of 13 cards that can cause you to bust on a hard 12 by taking a hit. Cards 5 through 9 put you in a better position with pat hands that total 17 through 21. Therefore, there are 5 cards that help you out of 13 possible denominations.

In six-deck blackjack where the dealer follows the S17 rule, your probability of winning is roughly 35% if you choose to stand on hard 12 against a deuce while that of you losing is almost twice as high at around 65%, i.e. if we do not take pushes into consideration.

Meanwhile, the likelihood of you winning if you take a hit in this situation is slightly greater at around 37% while that of you losing is roughly 63%. You are dealing with negative expectation no matter how you look at it. If you are consistent with standing on hard 12 against a deuce, you will lose $30 on average per every $100 you wager ($65-$35 = $30) when you flat bet in increments of $1 per hand.

Provided that you hit this hand consistently, you will lose only $26 on average for every $100 wagered on your hard 12 against a deuce ($63 – $37 = $26). It makes sense that you should choose the move that causes you to lose less money, right? 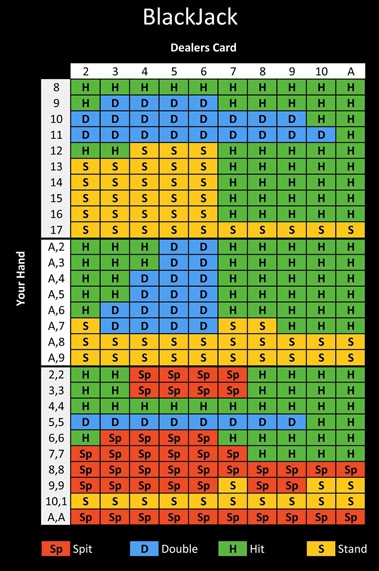 The Optimal Playing Decisions for Hard 13

Since hard 13 is more prone to busting than hard 12 (with 5 out of 13 card denominations that can break the hand), players should approach it more conservatively. Basic strategy recommends standing on hard 13 against upcards 2 through 6 because these put the dealer in a breaking position.

Conversely, the optimal approach for hard 13 when the dealer shows cards 7 through Ace is to take a hit. These cards are more likely to result in pat hands and put the dealer in a standing position where they outdraw the player’s hard 13.

Now that you know how to approach hands 12 and 13 against all possible upcards of the dealer, these two hard totals should no longer pose as a predicament to you at the blackjack table. Moreover, the strategy works in both online and landbased blackjack games.