Ashley Revell risked everything he owned on a single spin of
the roulette wheel at the Plaza Hotel and Casino in Las Vegas.
His life changed in the blink of an eye as the roulette ball
landed on red, doubling Revell’s money in a matter of seconds.

One would think, like other big winners who blow all of their
money on meaningless possessions, that Revell would be no
different. However, Revell surprised us all when he actually
saved the majority of his winnings, settled down, and started a
family.

Life Before His Big Win

Revell’s journey began while at the bar, drinking with his
friends, when they started talking about how great it would be
to go to Las Vegas and bet everything you had on one spin of the
roulette.

Although he had been drinking when this idea first popped
into his head, the next day he still thought it would be a good
idea. If he was going to go through with this, now would be the
best time, because he was still single, with no family or
obligations to worry about.

Despite his parents’ efforts of trying to talk him out of the
idea, Revell had a gut feeling that this was the right thing for
him to do. He began selling everything he owned from his Rolex
watch to his golfing clubs, leaving only necessities for
himself. Gambling in new york city. He auctioned the more expensive items off and held a
garage sale for the smaller items.

A UK online bookmaker took pity on Revell, giving him a
significant amount of money to stake on his bet. To show his
appreciation, Revel officially changed his name to, Ashley Blue
Square Revell.

After all of his efforts, in six months time, Revell had
managed to scrape together $135,300. He took all of it and
headed off to the Plaza Hotel and Casino in Las Vegas, Nevada.

Revell didn’t know ahead of time which color he was going to
pick, he only knew that he was ready to risk everything on a
single spin of the roulette wheel. Moments before the wheel
spun, Revell randomly chose red, confident that he was destined
to win.

Life After His Big Win

Time seemed to stand still for Revell as he waited for the
results of the spin, and sure enough, the ball landed on number
7, a red! Revell had managed to double his money in a matter of
seconds, giving him a grand total of $270, 600.

Revell’s win was broadcasted on Sky One, a realty mini-series
that was broadcasted in the UK. In an interview after the bet,
Revell said, “That was the most amazing experience I have ever
had in my entire life,” and we certainly believe him.

When Revell made it home, he completely changed his lifestyle
around, but certainly not in ways you’d expect. He realized that
before this adventure he had a lot of unnecessary “things” in
his life that really had no true value. He didn’t go off and buy
a lot of expensive items, but he instead focused on making
memories.

He travelled across Europe on the back of his new motorbike,
which he only bought because he had sold his car prior to the
bet. On his trip, he met his future wife and they are now
happily married with two children.

Revell’s win still amazes people to this day. He has been
featured in an E! Documentary special called, “THS Investigates:
Vegas Winners & Losers”, and “Red or Black?,” a game show hosted
by Simon Cowell is said to be inspired by Revell’s big win.

Revell launched a website called iGamingRecruitment.com,
which helps link online gambling companies to qualified job
applicants. Applicants can upload their resumes to the website
for employees to view or they can specifically apply for posted
jobs they are interested in.

Ashley Revell (born 1972) sold all his possessions, including his clothes, and gambled US$135,300 on a single spin of a roulette wheel in the Plaza Hotel & Casino, Las Vegas, Nevada. Revell even changed his name by deed poll to Ashley 'Blue Square' Revell after the UK online bookmaker contributed to his gambling fund. He raised additional cash through car boot sales and auctions.He has been termed a 'Professional Gambler', but this is a misnomer. Revell relied on pure luck when he merely guessed when he placed a single bet on red; the ball ended up on 7 red, and Revell had doubled his money, to $270,600. Everybody waited for new bets from him, but he gave $600 to a dealer as a tip, said 'thank you!', and left the casino. Revell used his winnings, not to professionally gamble, but to set up his own online poker company called Poker UTD.The event was filmed by Sky One as a reality mini-series titled Double or Nothing. He was also featured in an E! documentary special along with Stu Ungar called THS Investigates: Vegas Winners & Losers.An episode of the TV series Las Vegas entitled 'One Nation, Under Surveillance', first broadcast on 14 March 2005 had a character and event loosely based on Ashley Revell.Simon Cowell said that Ashley's bet was the inspiration behind his new game show called Red or Black?.Ashley Revell also owns iGaming Recruitment, a website that matches online gambling companies with job applicants. 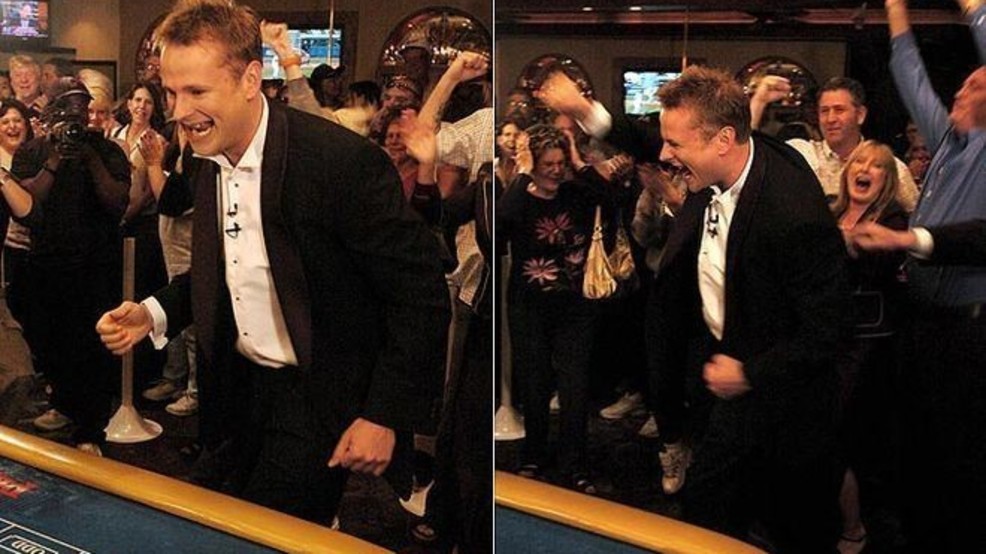 Ashley Revell Double Or Nothing